While enrolled in graduate school at the Rutgers University School of Nursing, I continued to work as registered nurse on a labor and delivery unit at an increasingly busy community hospital in central New Jersey. Though my unit boasts delivery rates exceeding 2,000 births per year, most of our patients are middle-class, low-risk women in their 30's giving birth to planned pregnancies carried to term. Though not a new nurse, at the time I was new to the labor unit, and happened to be on my final days of orientation when I received report on a primigravida in her early 20's in active labor. Her pregnancy was routine, and lab work normal with one exception – she was HIV-positive. This was not a situation that we experienced often, and the entire staff was on edge. She was roomed farthest from the others and supporting staff avoided entering her room. I, on the other hand, was intrigued. I admit my curiosity may have been interpreted as intrusive – she was so close to my age, I simply wanted to know how she contracted the virus, and when she discovered her status. However, throughout my 12-hour shift I kept my curiosity to myself and instead engaged her in conversation about her new baby and future aspirations, carefully avoiding the topic of her HIV status. We bonded, and soon she was fully dilated and ready to deliver her baby.

The baby was not yet 5 minutes old before this new mother was reminded of her HIV status; her celebration of her first-born cut short. She instantly became on edge and defensive, and I could sense the feeling of being attacked. Despite my naturally timid nature, it was in this moment that I finally chose to speak up – to remind everyone that this new mother deserved these unreproducible moments to bask in the joy of the birth of her first baby, even if just for a few moments. She deserved the privacy and respect that we provide for other new mothers. From that point on I vowed to learn more about HIV so that I could become a permanent advocate for individuals afflicted by its physical and social consequences.

I was nervous going into my interview with Dr. Suzanne Willard, PhD, APN-c, FAAN, the director of the HIV Specialization Program. However, I immediately felt a sense of welcome, support, and family. Our courses were small, yet thorough and there was an obvious sense of passion from each of our course professors regarding not only the medical treatment of HIV, but also the psychosocial care of the patient as a human being. HIV is no longer a death sentence, rather a livable, chronic condition and should be treated as such. My professors were thoroughly invested in insuring that we not only understood the material, but that we were also engaged in policy for people living with HIV. These experiences expanded into my clinicals. Each of my HIV-preceptors were incredibly knowledgeable and supportive, and it was encouraging to see advanced practice nurses fulfilling roles as leaders in HIV management and research, running clinics, and writing grants, all while maintaining therapeutic patient relationships. 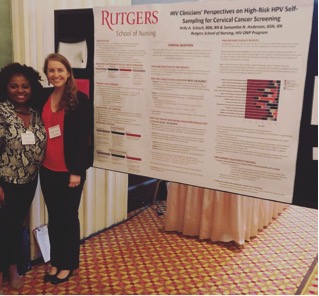 Through the program I connected with Kelly Schoch, another post-BSN to DNP Women's Health Nurse Practitioner student, and we soon discovered that we were the first two students to merge the Women's Health Program with the HIV Care Specialization Program. Women living with HIV (WLWH) face many unique burdens, including the increased disease burden associated with cervical cancer, and account for approximately 70% of new cervical cancer diagnoses in the United States (Panel on Opportunistic Infections in HIV-infected Adults and Adolescents, 2016). Still, through clinical experiences in urban cities throughout New Jersey, Kelly and I noticed that many WLWH were out of date with their Pap tests. Many scheduled appointments resulted in no-shows, data which was supported by the literature (Frazier et al., 2016; Simsonsen et al., 2014). Through further research we discovered that commonly cited barriers were inherent to the procedure itself, including pain, embarrassment, and fear of the procedure (Williams et al., 2015) due to a history of sexual abuse (Abercrombie, 2003), depressive symptoms (Frazier et al., 2016; Tello et al., 2010), or a simple lack of knowledge about the importance of screening (Abercrombie, 2003; Williams et al., 2015). In reviewing the literature for ideas to improve screening rates for WLWH, we discovered primary HPV testing and patient self-collection of cervicovaginal samples for HPV testing (“HPV self-sampling”), as a method of cervical cancer screening triage, a method currently being researched and implemented in New Zealand (National Screening Unit, 2016), Australia (Farnsworth, 2016), the Netherlands (Ketelaars et al., 2017), France (Haguenor et al., 2014; Sancho- Garnier et al., 2013), and Sweden (Broberg et al., 2014), and already seeing success in improving adherence rates in the general population of women.

In 2015, the Society of Gynecologic Oncology (SGO) and ASCCP released interim recommendations for primary HPV screening using clinician-collected samples, however at this time there is no United States Food and Drug Administration (FDA) approved device to allow for HPV self-sampling available in the United States, and HPV self-sampling is not included in the most recent cervical cancer screening recommendations by the American Society for Colposcopy and Cervical Cytology (ASCCP), American Cancer Society (ACS), and American Society for Clinical Pathology (ASCP) consensus guidelines - endorsed by the American College of Obstetricians and Gynecologists (ACOG), and United States Preventative Services Task Force (USPSTF). Despite this, HPV self-sampling has shown promise in large-scale trials conducted within the United States (Balasubramanian et al., 2010; Katz et al., 2016), with comparable sensitivity to clinician-collected samples (Saslow et al., 2012), and improved screening rates in previous screening non-attenders (Broberg et al., 2014; Duke et al., 2015; Nelson et al., 2017); clinical findings that were consistent even when applied to studies involving WLWH (Adamson et al., 2015; Murphy et al., 2016; Petignat et al., 2005). Given this limitation, the purpose of our DNP project was to examine the perspectives of HIV clinicians regarding HPV self-sampling, and whether they would not only offer it to their patients if FDA approved, but also if they would trust the results generated from its use to make clinical management decisions. Utilizing an online educational intervention and survey, our aim was to contribute to the literature supporting HPV self-sampling with the goal of facilitating eventual policy changes for its inclusion as a method of cervical cancer screening triage in future screening recommendation updates.

There were 26 respondents to the survey, which included registered nurses, nurse practitioners, and physicians from the Northeastern and Southern United States who provide care to people living with HIV. Results showed that although most participants (69.2%) were aware of the primary HPV screening guidelines, less than half (42.3%) reported that they were not currently utilizing it in practice. However, the large majority (88.9%) of respondents reported that that would utilize primary HPV screening in WLWH if supported by the literature, and 80.7% indicated that they believed offering HPV self-sampling to their patients would increase cervical cancer screening attendance rates. The purpose of the online educational module was two-fold, to provide a succinct review of HPV, cervical cancer etiology, and the influence of HIV on each, as well as to assess clinician perspectives of HPV self-sampling and intent to offer self-sampling to their female patients if FDA approved. Both students and faculty in the Rutgers HIV Care Specialization Program were invited to participate in the module and anonymously complete pre- and post- questionnaires. Seventeen post-module questionnaire responses were received from registered nurses (100%), and revealed improvement in key clinical areas, including awareness of the SGO & ASCCP interim primary HPV screening guidelines, confidence using clinician-collected samples for high-risk HPV testing, and confidence utilizing results of patient-collected samples to make further clinical decisions. The module was initially targeted towards practicing advanced providers (i.e., APNs, physicians, and physician assistants), therefore it is arguable whether the perspectives of currently practicing primary providers were captured. However, the data gathered remains contributory as RNs may have reported screening observations in their clinical practices. Further, as students enrolled in an advanced nursing practice program, the completion of this continuing education module may be influential for students to become gatekeepers for primary HPV testing and self-sampling in their future APRN role.

Through the HIV Care Specialization Program, we connected with several leaders in HIV policy, advocacy, and research and, with their generous support, brought our project to the national level. Our abstract was accepted by the Association of Nurses in AIDS Care (ANAC) for their Graduate Student Poster Symposium, and with financial assistance through the program grant, we presented at their annual national conference in Dallas, TX.

As a recent Doctorate of Nursing Practice (DNP) graduate, I have not yet begun practicing as a primary provider. However, the support that I received as a member of the HIV Care Specialization Program was unmatched and I am forever grateful to be granted with opportunities that I would not have otherwise been able to experience. The HIV Care Specialization Program was more than an educational experience for me, but a life experience that will forever shape my practice as a clinician. I feel better prepared to relate to my patients as people in a professional, yet therapeutic manner. I feel competent in HIV as a disease process, and its unique influence on the body, symptomology and medications, especially related to the care of women. Most importantly, I received the necessary foundation to continue my initial goal – to become a forever ally and advocate for people living with HIV.