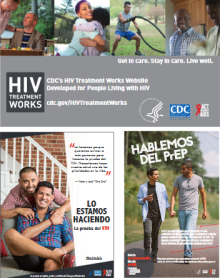 Although Hispanics/Latinos make up 18 percent of the U.S. population, they accounted for nearly 23 percent (252,400) of the estimated 1.1 million people with HIV in the United States in 2015. As in other racial and ethnic communities, the majority (nearly 60 percent) of Hispanics/Latinos now with HIV are men who have sex with men (MSM).

Surveillance data indicate that the number of Hispanic/Latino MSM who are newly diagnosed with HIV is increasing, even as new diagnoses are stabilizing among MSM overall and declining for the overall U.S. population. From 2011 to 2015, HIV diagnoses among Hispanic/Latino MSM grew by 14 percent. This increase can be partly explained by higher rates of HIV testing, reflecting progress toward national HIV testing goals. Yet a separate CDC analysis estimated that actual new infections among Hispanic/Latino MSM did, in fact, increase 18 percent during the same period.

Celebrate 35 Years with the AETCs